Want to know if Lipoflavonoid Plus is right for you? Since so many people have tinnitus, there are a lot of products that try to reduce or eliminate the symptoms. It’s not easy to evaluate all of them and decide which one might work.

In this Lipoflavonoid Plus review, we will examine the product, its benefits, and its results, as well as the customer reviews and feedback. So by the end, you’ll know if it’s the best choice for you. 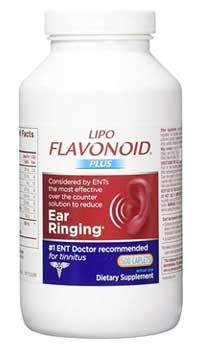 View Lipo-Flavonoid Plus on Amazon

Ringing in the ears, or tinnitus can be an extremely annoying problem. It affects many people and can really damage your quality of life. I know how much of a problem it is because I suffer from tinnitus myself. I sometimes even have trouble sleeping because of the ringing in my ears.

Lipoflavonoid Plus Review: The Product Details

Lipo-Flavonoid Plus is a proprietary formula for tinnitus which comes in caplet form. The main ingredient of eriodictyol glycoside was developed and tested by Dr. Henry Williams while working at a prominent Minnesota Clinic. The lipoflavonoid in the name of the product refers to bioflavonoids found in lemons.

This product has gained a lot of attention as a treatment to alleviate the symptoms of Meniere’s disease and ringing in the ears. Furthermore,  LipoFlavonoid has been used and evaluated in clinical settings for over 50 years, and continues to be the number one solution recommended by ENT doctors for patients with tinnitus.

What Are the Benefits and Results?

This product claims to clear up ringing in the ears. The results appear to be mixed. Some customers report that they tried many different products, and only Lipoflavonoid Plus was able to alleviate their symptoms. Others say in their reviews that Lipo-flavonoid Plus did nothing for their tinnitus, even after they used an entire pack of 100 caplets.

A common thread among the reviews that the product worked was that some people began by taking two caplets three times a day for the first two months.  Starting with a higher dosage seems to make a big difference for the first exposure to the product. After those first two months, dropping down to one caplet three times a day does not appear to reduce the effects of the treatment.

Aside from tinnitus, many people also report relief from Meniere’s disease. This disorder has several symptoms associated with the inner ear, like dizziness, ear pressure, and hearing loss. Meniere’s disease is chronic and has no known cure, but it appears that Lipoflavonoid can help to ease the symptoms.

What Are the Lipo-Flavonoid Plus Ingredients?

The following is a list of the LipoFlavonoid Plus ingredients: 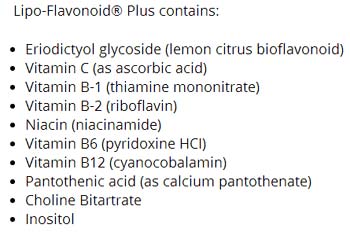 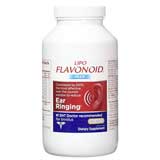 What Do Customers Say About It?

Lipoflavonoid Plus has a lot of positive reviews from people who experienced relief from their symptoms. In contrast, there are some people who say that the product did nothing for them.

Based on that alone, it appears that Lipo-flavonoid Plus doesn’t work for everyone. But it does work for over half of all people who try it and then report their experience. That is a good sign because usually, the people who take the time to rate the product are more likely to have a negative experience.

The neutral reviews are primarily from people who experienced some, but not significant, reduction in the severity of their symptoms. That supports the idea that using Lipoflavonoid for tinnitus is not a guaranteed cure – it works better on some people than others.

It seems that the most reliable way to get effective results is to start by taking two caplets three times a day (6 caplets total each day) for the first two months.

Is Lipo-Flavonoid Good Value For Money?

The answer to this depends on how many caplets you buy at once. For example, the recommended daily dosage is six caplets per day, so if you purchase a single bottle of 100 caplets, it will only last about two weeks. Therefore, you’ll get better value when you order a larger supply.

If you’re looking for the best overall value,  the 2.5-month supply is your best option.  Alternatively, if you choose a smaller pack, the cost per caplet generally goes up.

Consider how much better off you’ll be when you learn how to address the root cause of your tinnitus, the proven ways to treat it, and how to get rid of it for good…

Click Here To Learn How To Do This With Tinnitus Miracle »

On the other hand, the potential to reduce or end the symptoms of tinnitus or Meniere’s disease means that the benefits of this supplement are significant.

For that reason, I believe that Lipoflavonoid Plus is worth trying  if you’re prepared to take it for the full recommended 60 days before evaluating your results.  Based on the results you get after two months, you will also know if it is worth buying regularly.

At the end of two months mentioned above, it should be obvious if Lipoflavonoid is alleviating your symptoms or not. If it is, you may then want to transition to the maintenance dose of one caplet three times a day.

However, if the improvement is not significant, then stop taking the supplement – your symptoms might not respond to it. This “trial period” approach should let you see if Lipoflavonoid Plus is a good fit for your symptoms without spending a lot of money on a treatment that might not work.

My final recommendation? Try Lipo-Flavonoid Plus for at least 2 months and base your next steps on that…