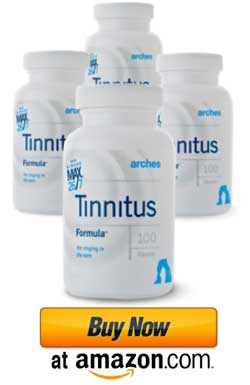 If you suffer from ringing or buzzing in your ears, also known medically as tinnitus, you know what an irritating and debilitating condition it can be. Tinnitus can prevent you from hearing clearly, limit your daily life and make you miserable.

You’re not alone, either. In fact, the American Tinnitus Association estimates 50 million Americans are afflicted with this disorder.

Arches Tinnitus Formula is one of the many products available to treat tinnitus. This over-the-counter product claims to provide tinnitus relief in up to 80% of patients. If true, this could provide relief to millions of tinnitus victims without the need for a prescription. So, does Arches Tinnitus formula work as advertised? 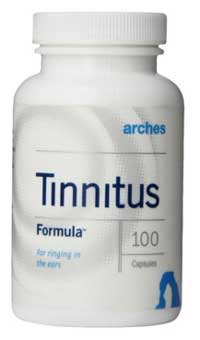 Arches Tinnitus Formula is manufactured by Arches Natural Products. Based in Utah, this company also provides stress relief and sleep aid products, but the tinnitus formula is definitely their premier offering.

The Arches Tinnitus relief formula is all-natural, composed of herbal and mineral ingredients. Its main components are ginkgo biloba, zinc, and garlic. All of these ingredients have been shown in medical studies to have various effects on the human body.

Most tinnitus patients are willing to try almost anything to relieve their condition. The aggravation it causes can easily become overwhelming. Having said that, many people look for safe, all-natural remedies now, which makes Arches Tinnitus Formula a popular choice.

The Pros and Cons of Arches Tinnitus Formula

The Pros – What’s Good About It

When looking at Arches Tinnitus Formula’s ingredients, you can easily see that it is indeed all-natural, with some familiar components:

Ginkgo biloba has a mild anticoagulant or blood-thinning effect. So this could certainly reduce pulsatile tinnitus, a form of the disorder where you feel a pulsing sensation in your ears. Furthermore, ginkgo has been used in Germany for over a decade as a treatment for tinnitus.

Zinc is a mineral naturally found in the body and necessary for good health. The effect of zinc on ringing in the ears is less certain but is supported by a study published in 2003. Researchers found that many people who reported tinnitus had hypozincemia, or low zinc blood levels. Providing zinc supplements reduced tinnitus in 82% of the study patients. There is also evidence that zinc can help with the vertigo, or dizziness, that sometimes accompanies tinnitus.

Garlic has long been known to have a positive effect on the circulatory system, promoting increased blood flow. Since most specialists believe that poor circulation is a component of tinnitus, it would stand to reason that garlic could help relieve the condition. Don’t worry about bad breath though. The Arches tinnitus treatment uses an odorless form of garlic.

Arches Tinnitus Formula has several testimonials from otolaryngologists (ear, nose, and throat doctors) stating they recommend it for their tinnitus patients. They’re putting their professional reputations on the line with these endorsements, so there is likely substance to their claims, particularly since they’re recommending an over-the-counter product.

The Cons – Things To Watch Out For

So what’s the downside? The manufacturer makes a few caveats clear. First, people taking warfarin or other prescription blood thinners should definitely consult their doctor before taking this product. This is because the anticoagulant effect of ginkgo could cause a problem with their medications.

Also, Arches Natural Products is very upfront that Arches Tinnitus Formula will not completely remedy tinnitus in everyone. They report that 70-80% of consumers experience an improvement in their condition. Furthermore, they state that most people will not notice any change during the first bottle or 25 days. They recommend that you take the formula for at least 90-100 days, or 4 bottles, to see the best results.

Arches also make both a sleep formula and stress formula that they recommend you take along with the tinnitus formula. They’ve identified stress and lack of good sleep as two root causes of tinnitus and introduced this system of three products for maximum relief. Obviously, such a regiment could quickly get pricey, but it might be worth it if your tinnitus is hurting your quality of life.

What Do Customers Say About It?

The Arches Tinnitus Formula reviews appear to be mixed, but overall, there are more positive reviews than negative. Many customers report that the product works for them, and some say that takes a while to see results. As you may have guessed, the most common complaint is that the consumer noticed no improvement in their tinnitus symptoms.

Based on the customer reviews, it seems that Arches Tinnitus Formula doesn’t work for everyone. However, it does work for about 50% of all users who try it and then post their results.

So is Arches Tinnitus Formula Worth Trying?

The answer to this question boils down to your individual situation. If you’re searching for relief and want an all-natural product, Arches Tinnitus Formula presents a valid option. Click here to check prices on Amazon »

As Arches states multiple times, tinnitus is not a completely curable condition. Not even your doctor is going to be able to provide a treatment that is 100% effective all the time.

Consider how much better off you’ll be when you learn how to address the root cause of your tinnitus, the proven ways to treat it, and how to get rid of it for good…

Click Here To Learn How To Do This With Tinnitus Miracle »

That said, if you’re willing to give the product 90-100 days, there’s a good chance it can work for you. Ninety days may seem like a long time, but as the saying goes, anything worth doing is worth doing right. Based on the results after that trial period, you will know if it will be worth buying regularly or not. The monetary investment is certainly less than a few doctor office visits, and much lower than expensive medical testing.

To sum up this Arches Tinnitus Formula review, I believe that this product is worth trying if you’re prepared to take it for the full recommended 90-100 days.

It’s certainly not a panacea or a magic bullet, but it just might eliminate, or at least reduce, your tinnitus. The customer reviews, the medical testimonials, and the clinical studies all suggest that Arches Tinnitus Formula has a real chance of helping you with this chronic problem.

My final recommendation? Try Arches Tinnitus Formula for at least 90 days and base your next steps on that…